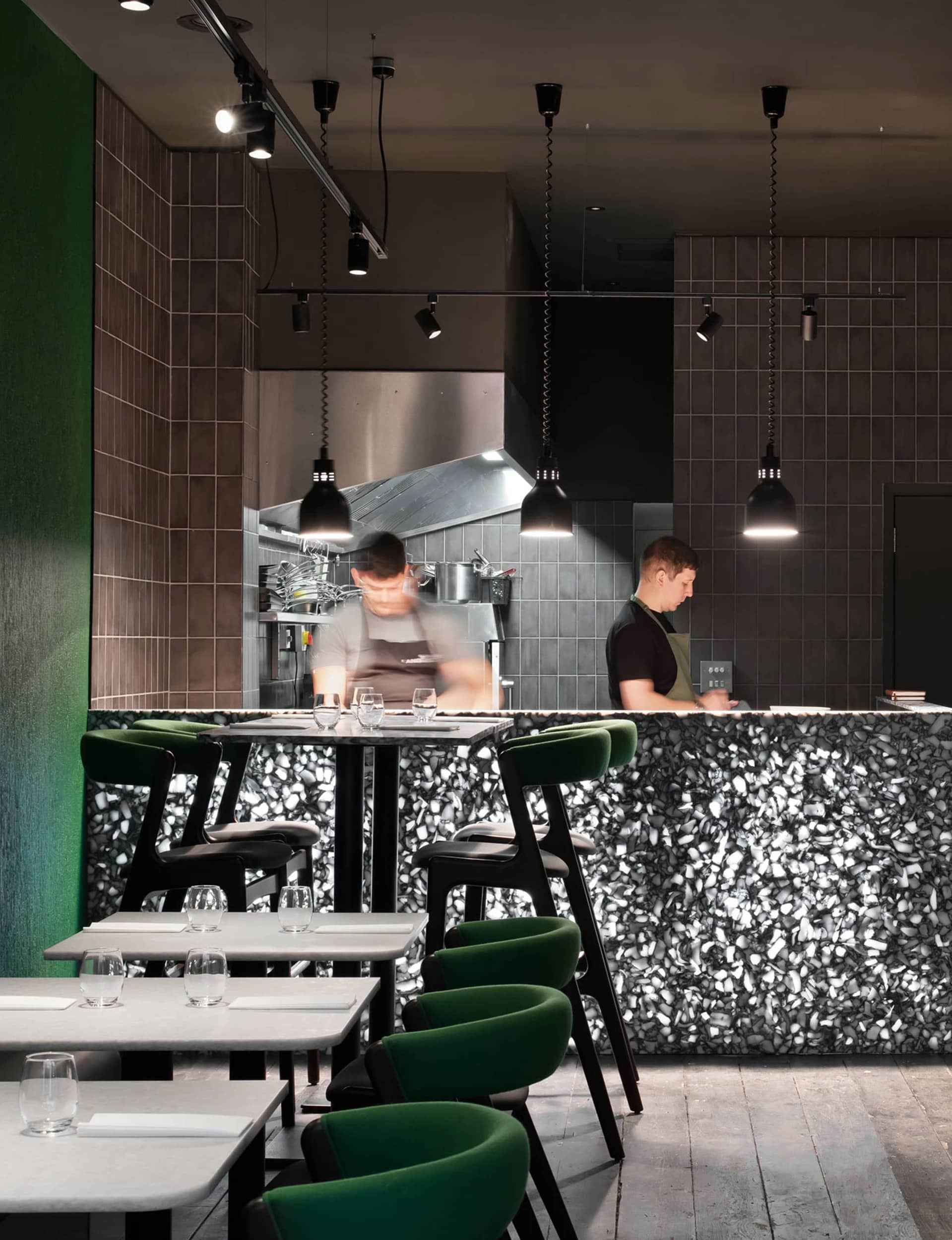 How two meat-eating chefs are paving the way in plant-based fine dining at their Birmingham restaurant, Land

I’m not going to lie: Adrian Luck and Tony Cridland, co-head chefs of plant-based restaurant Land, are not what I expected.

Coined ‘culinary disruptors’ by Jay Rayner in The Guardian, the pair are refreshingly relaxed and appear unaware of the culinary stir they have created in their home town of Birmingham.

Almost four years ago, Luck and Cridland met working at vegetarian restaurant 1847. Beforehand both chefs had little to no experience with meat-free cooking, but they quickly forged a love affair with plant produce to the extent that when the owner announced plans to sell the business, the pair jumped at the chance to purchase it.

They wanted to rebrand the restaurant and move to a smaller site, but lacked the immediate funds to do so. “We only had a small kitchen with a tiny oven, so we were unable to do the products justice,” Luck says. The owner allowed them the use of the brand for a year whilst they raised funds to rebrand and refurbish. The rebranding to Land was a success, but after five months any plans for a refurbishment were put on hold due to lockdown. This came, sadly, just after the publication of a glowing review from Jay Rayner, in which he described the restaurant as ‘vegan cookery to file under thrilling’. The immediate impact of this review was astronomical. The very same day, they took 800 bookings. The imminent announcement of lockdown meant that every single one had to be cancelled. The pair see the delay to refurbishing as a lucky escape, as they were able to approach the restaurant’s reopening in September 2021 in a better position than they could potentially have been. “The refurbishment and the move to the new site took longer than anticipated, so really it feels like we have only just opened, in a way.” Luck says, with the expression of somebody who is perhaps still taking it all in.

They both feel that their new site, with space for only 22 covers compared to the previous 36, is “smaller but better”. Catering to a smaller number of diners allows them to focus solely on delivering the best ingredients and service possible.

Both chefs tell me that crafting the menu to a high quality is the most important consideration,

“The quality of the ingredients comes first. We try to use as many seasonal ingredients as we can, although it isn’t always possible. Sometimes we are unable to get something in season, but we would rather use an ingredient that tastes better.”

The current setup operates around a tasting menu, which, compared to the format of 1847, allows both chefs to prepare exactly the right amount of food and plan ahead. Cridland adds that the other crucial consideration is that “everything on the menu has to be delicious.”

I ask Luck if he has a favourite time of year for seasonal produce. He considers his answer carefully. “I quite like spring. After a long, boring winter of root vegetables and preserves, you’re finally able to start getting fresh ingredients again. Some of my favourite ingredients are asparagus, wild garlic and rhubarb.” Does he have a favourite recipe that uses any of these? “I haven’t tried all three together,” he jokes. “But although it isn’t plant-based, I love a poached egg with asparagus and a wild garlic sauce.” Cridland tells me that his favourite seasonal produce are tomatoes and sweetcorn, as they remind him of his childhood, growing up in a Cheshire village where he would see them bloom each year.

It may surprise people to know that both Luck and Cridland, despite running a fully plant-based restaurant, are meat-eaters. They have noticed that at least half of Land’s customer base are meat-eating diners, which is, they think, partly due to two things. “We don’t use any meat substitutes. They just don’t taste good! To us, it is more about championing the vegetables, fruits and any produce we can get, and simply getting the best results from those. We also do not use the word ‘vegan’. It can put people off and give them a negative opinion. Although they know what they are eating is vegan, they seem happy to experience a ‘plant-based’ restaurant.”

The style in Land is relaxed, despite the groundbreaking concept they are at the helm of. “Sticking to one thing is boring. There are too many seasonal British fine dining restaurants at the moment. Being plant-based makes us different. We also change the menu quite often, around every twelve weeks or so, to keep it fresh. There is something different for everyone.” Luck says. A range of different cultures influence the Land menu, too. Some dishes take inspiration from Luck’s time in Indonesia. One dish he is cooking now has an Indonesian curry sauce which he learnt to make whilst there. He tells me that he doesn’t introduce it too heavily into the dishes at Land for one reason: his wife is Indonesian and it is what he mainly cooks at home.

Five years spent teaching English in Indonesia allowed Luck to learn and experience a vast amount about the local cuisines there. “I was able to learn from actual people there instead of books. People are a lot happier to show you how to do these things when they know you’re just a tourist.” He says that his favourite dish he learnt to make there was Beef Rendang, as he was able to see it first-hand in the region it originated from. Cridland tells me, grinning, that his favourite dish to cook at home is Pad Thai, “especially for lunch”.

I ask both chefs where – if they get time away from the unsociable hours of their job – they like to go out and eat. Cridland tries to visit as many Michelin-starred or highly awarded restaurants as he can. “I love to see what they do with both food and service. I can learn from it.” He particularly admires the work of chef Simon Rogan. “What Simon is doing is inspiring. It has taken him a long time to get to three stars, but it is great to see what he has achieved with his empire and the high-level standards he keeps. He grows his own ingredients and experiments with plant-based cooking, too.” Luck enjoys visiting Birmingham street food venue Hockley Social Club, and neighbourhood cafe CanEat. “Their menu changes almost daily, but the 7 Minute Eggs are my go-to for brunch.”

Hearing Luck talk about his favourite food spots in the city, I ask for their thoughts on Birmingham’s ever-growing culinary scene. “Birmingham stands out for its diversity,” Luck tells me. “There aren’t too many restaurants doing the same thing. You can have something different every week and usually, whatever you are looking for, you’ll find.” Cridland agrees. “The food scene in Birmingham is massive! In the future it will only get bigger. It’s not just Michelin-starred places, either. It is a real multi-cultured, diverse city. There are a lot of up and coming chefs here. If we can aspire to be like them, and the big fine-dining restaurants, that is ideal.”

After a whirlwind six months since reopening, I wonder what is next for Land. Both chefs are in agreement that national recognition is their next goal. “Rosettes or Michelin, if it comes to it.” Luck says. “But we want lots of happy customers, more than anything. You have to cater to your customers before the guides.” Cridland is keen to experiment with growing produce at the restaurant. “I would love a micro fridge where people can see the herbs being grown right there.”Pushing towards a more eco-conscious, zero-waste process appeals to him. He was inspired by the introduction of the Green Star to the Michelin Guide in 2021. “If you’re growing your own stuff, you definitely have more of a connection with the food.”