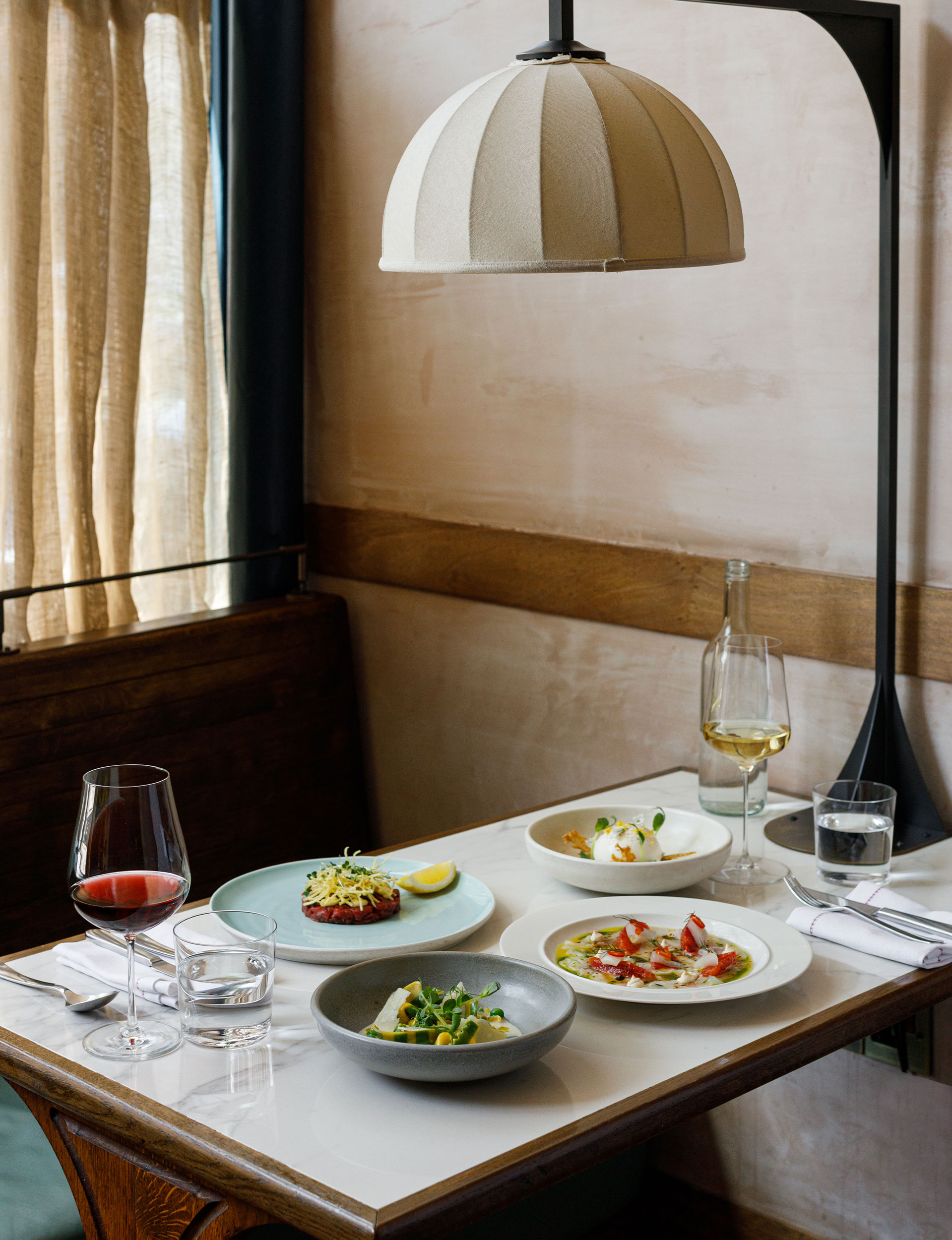 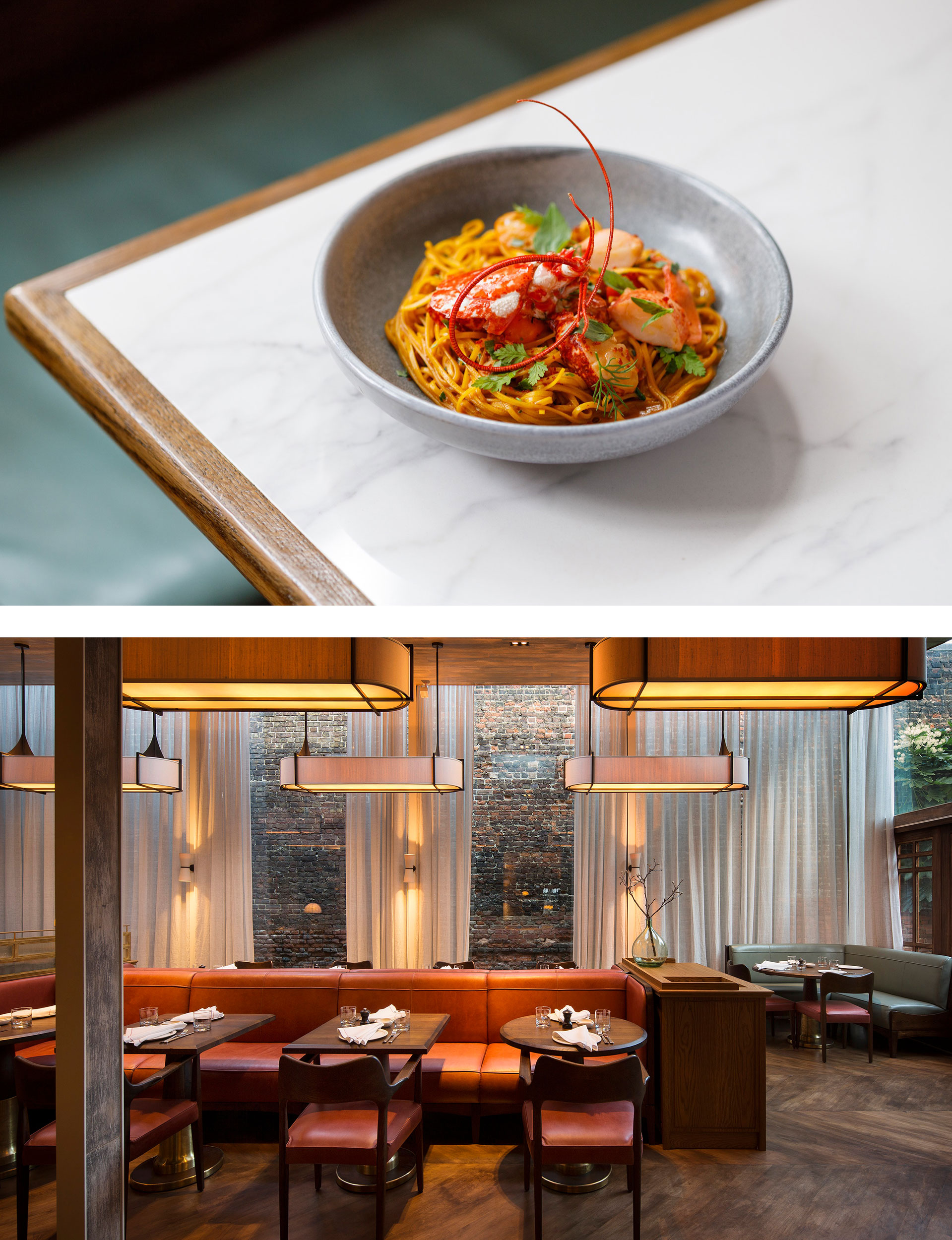 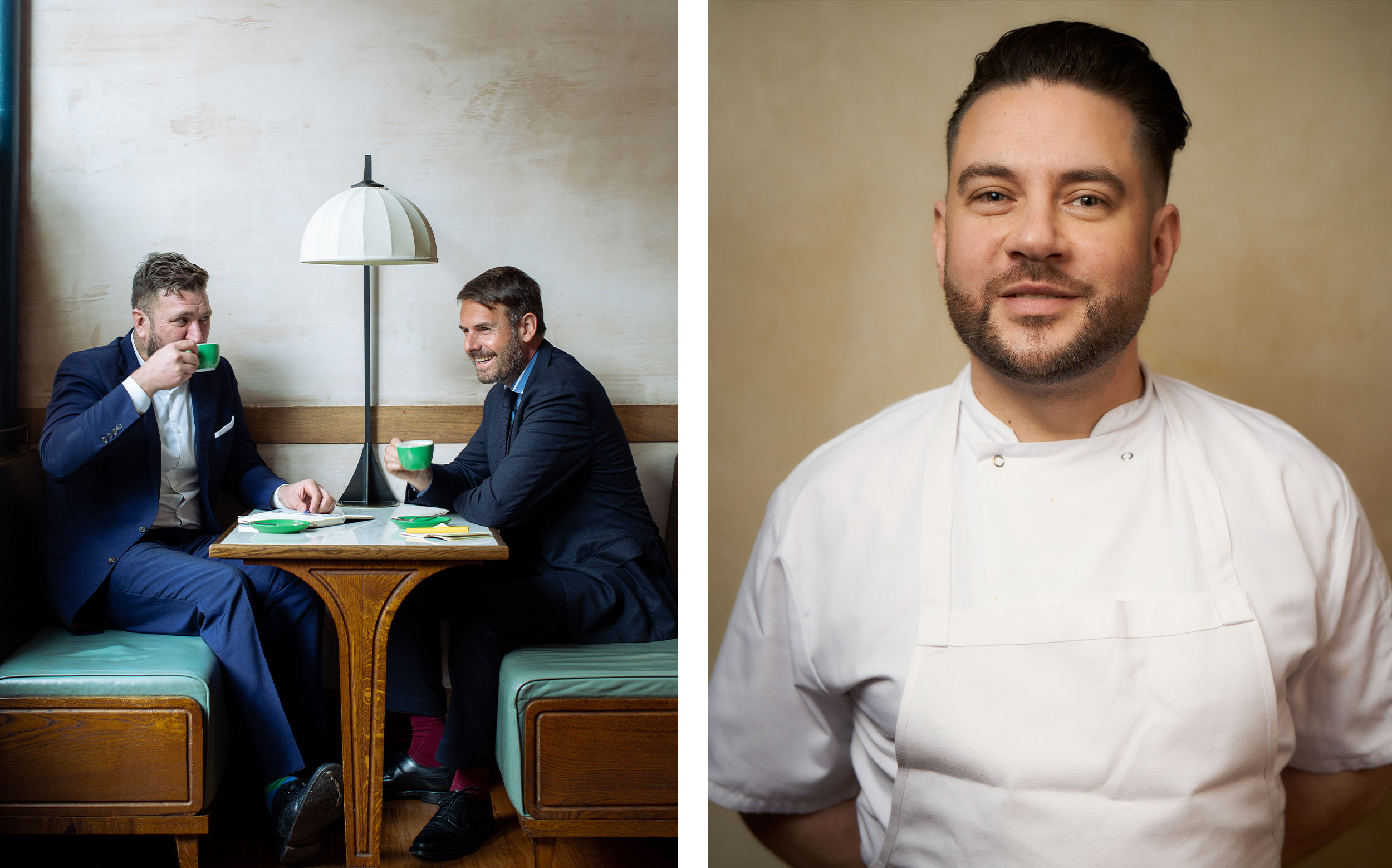 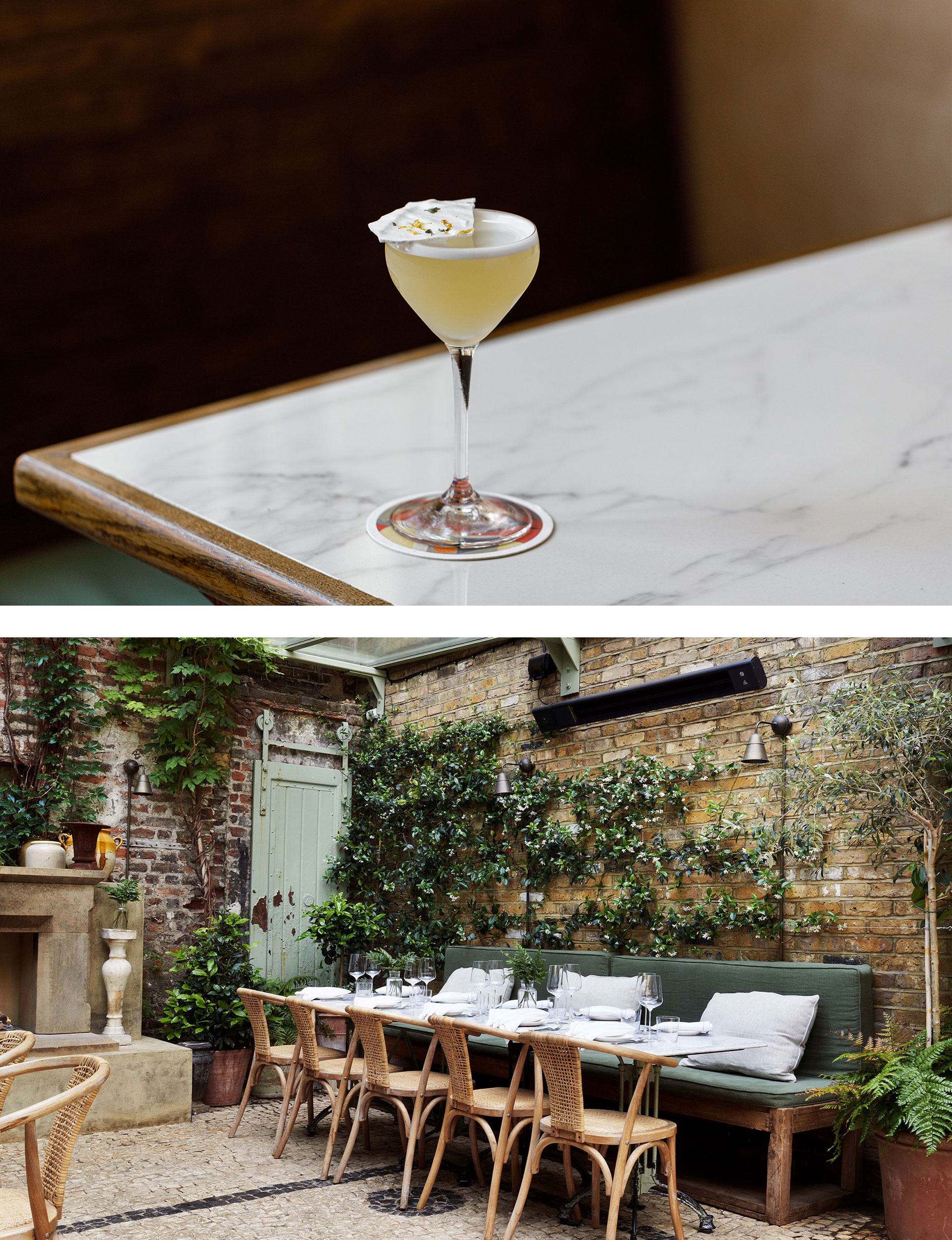 The outcome speaks for itself. The Guardian cited Luca as having ‘the makings of a classic’. Monocle named it 2017’s Restaurant of the Year. While London is littered with many Italian restaurants, Luca appears to be standing out from the crowd. They aren’t afraid to edit the bases of the classics to suit their half-and-half menu style. Owners Johnny Smith, Daniel Willis and Isaac McHale found their champion in chef Rob Chambers. Rob’s dual heritage played perfectly into their vision for Luca’s menu: championing British produce to give Italian dishes a twist.

Rob’s love of food began early. After losing his parents aged six, Rob was raised by his Italian grandparents. In their home, Rob says that ‘food was taken very seriously’ and he leaned on the comfort of home cooking during difficult times. His early memories are of his aunts grabbing him in the kitchen to make fresh pasta and five course meals over Easter and Christmas. As he got older, working in a family friend’s trattoria helped him to grow his passion for food. “I started off as a waiter and at the front of the house. The kitchen was too narrow so I wasn’t allowed in, but that’s where I felt I wanted to be.”

Rob decided to make the move to London to attend catering school and begin working. After stints at the Royal Automobile Club in Pall Mall and the 5-star Hotel Café Royal, he moved on to positions at Michelin-star establishments such as Giorgio Locatelli’s Locanda Locatelli, The Ledbury, The Square and The Clove Club. After taking a role at the Royal Automobile Club again, Rob made use of his holiday time to assist in other kitchens, benefitting from the learning experience without the added pressure. This led to a week working at The Clove Club. Upon meeting Johnny, Daniel and Isaac, Rob instantly clicked with them.

“When they pitched Luca to me it was a no-brainer. I am very proud and happy of my heritage, I have the best of both worlds and with Luca, I knew we would be able to capture that rather than just cooking Italian cuisine from the book.”

“I worked there for one week and they soon called me back in. They sat me down and said, ‘we have an idea.’” Johnny, Daniel and Isaac had a vision for a restaurant that would blend excellent Italian cooking with brilliant British produce, and with Rob’s half English, half Italian heritage, they felt that he was the man to bring their idea to life. “When they pitched Luca to me it was a no-brainer. I am very proud and happy of my heritage, I have the best of both worlds and with Luca, I knew we would be able to capture that rather than just cooking Italian cuisine from the book.”

The trio set out to create a restaurant ethos and menu that would respect the classics but break the rules. It was about bringing character, for example, serving a beautiful Burrata with English peas and mint. “At first, we wondered quite how Italian or British to make the dishes, but it isn’t about that. It’s about cooking the food you truly love, getting to know your customers and cooking the food they truly love, too. Tasting these recipes, I instantly knew that it would work.”

Crafting Luca’s menu reminded Rob of the roots of his passion for food. “The thing I really love is pasta. When I would go out with friends in my twenties, they would grab a pizza on the way home, but I would head home with my best friend where we would stay up until the morning cooking big plates of pasta.” Since his arrival in London, Rob felt keen on finding a restaurant where he could do more than just cook basic Italian recipes. “I had a vision of where I wanted to be and the style I wanted to cook in. When I turned eighteen, my uncle, who had migrated to the UK with just a suitcase, suggested that I open a restaurant serving pizza and pasta. That just wasn’t me. I’ve always wanted to do more than that, which is why I came to London.” Rob’s dream was to work in a kitchen which allowed him to focus on making fresh pasta every day but also work closely with suppliers to source the best meat and fish products. “I wanted to get hold of the best lamb, beef and scallops; to find somebody with the butchery skills to break down a whole fish.”

Finding his role at Luca was a full circle moment for Rob. “When Luca came around, I thought to myself, this is perfect. It is exactly what I have always wanted to do. I’m able to work with flavours that make sense to me, not overdoing them and ensuring the final result stays true to the vision I have for a dish. I believe that it is important to cook the cuisine that you are passionate about. You should truly love a dish in order to excel at it, and then it comes naturally.”

On Luca’s current menu, Rob feels the most excited about their Taglierini of Cornish lobster with tarragon, chilli and garlic.

“Now is the ideal time to enjoy lobster as it’s in season. We make our pasta fresh on-site and cook the lobsters’ heads and shells into a lovely bisque sauce. The taste has the perfect balance of heat and sweetness.”

When crafting a menu that is focused around the use of high-quality, in-season produce, Rob and his team are careful to ensure this is approached correctly. “Seasonality is key, as is making sure you aren’t over complicating the process for the team. The costs are important. Running a restaurant is not cheap, and when a product is in season, the price is just right.” With seasonality in mind, Rob especially looks forward to one particular time of year. “Spring is by far the most interesting time of year. After winter ends and we finally move on from root vegetables, really exciting and beautiful produce comes into play, such as wild garlic, Italian peas and Italian broad beans.” 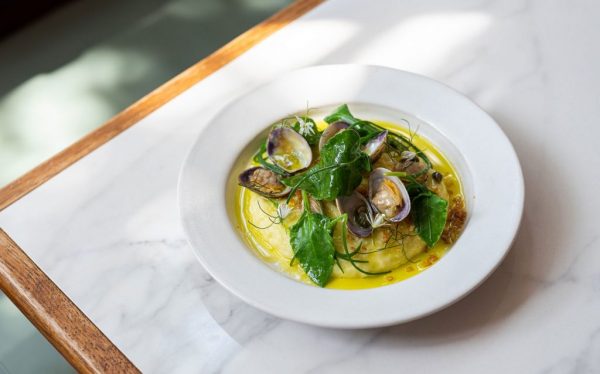 When he isn’t working, Rob loves to spend time cooking at home for his family and friends. “I often ask my suppliers for a t-bone steak, chateaubriand or turbot.” Living just outside of London allows for some separation from his job, but when he does head into the city to dine, he has a soft spot for Indian restaurant Gymkhana. “The dishes at Gymkhana are totally different to the flavours and ingredients I use daily. Their spices are great and they have some massive flavours. I love their Lamb Shank Rogan Josh and Tandoori Masala Lamb Chops.”

Growing up, Rob’s inspirations in the culinary world included the likes of Marco Pierre White, Pierre Koffman and Sergio Herman. These days, Rob takes his inspiration from his team and what they are working to achieve at Luca. “It is a difficult time in the industry with staffing problems, and the landscape of the industry has changed a lot. It’s important to me that we create a workplace that is always getting better. Focusing on being a nice place to work with a great work-life balance for young chefs is a top priority. I want to show them that this job doesn’t have to be a 90 hour week where they will have no energy on their days off. I want to ensure my staff are looked after and feel excited to come to work.” Rob’s previous experiences have shaped his approach to training his staff. “I’ve been cooking for over twenty years now and it’s all I’ve ever known. Back when I started it was poor pay and long hours, usually eighteen hour days. I would be so tired that it would hurt, and I knew that although I loved the role, it was a given that I would be exhausted on my days off. Things are changing for the better now. It is important to use a potentially bad experience you have had as an opportunity to change the situation for your team and create something positive.”

The positive reviews Luca has received are, Rob says, ‘welcomed and very important to the industry’. Going forward, he feels that the team’s focus will be firmly on evolving within the London hospitality scene. “We want to improve week on week, working on guests’ dining experience and continuing to change the perception of the hospitality industry. It’s all about bringing our A-game and pushing boundaries, focusing on good quality ingredients and cooking techniques whilst making sure the team aren’t stretched to their limits. We’re lucky that Luca is becoming a real destination restaurant. We are known by foodies, we have regulars and we are busy every single lunch and dinner service. It’s amazing to see everybody’s hard work paying off.”

As Luca continues to grow, Rob doesn’t show any signs of slowing down, either. He may have come full circle, achieving a role that encapsulates his early visions of where he wanted his career to be, but he feels that he still has plenty of work to do at Luca. This half-Italian, half-British lover of pasta is now at the helm of one of London’s most renowned Italian restaurants, and it looks as if he isn’t going anywhere soon. 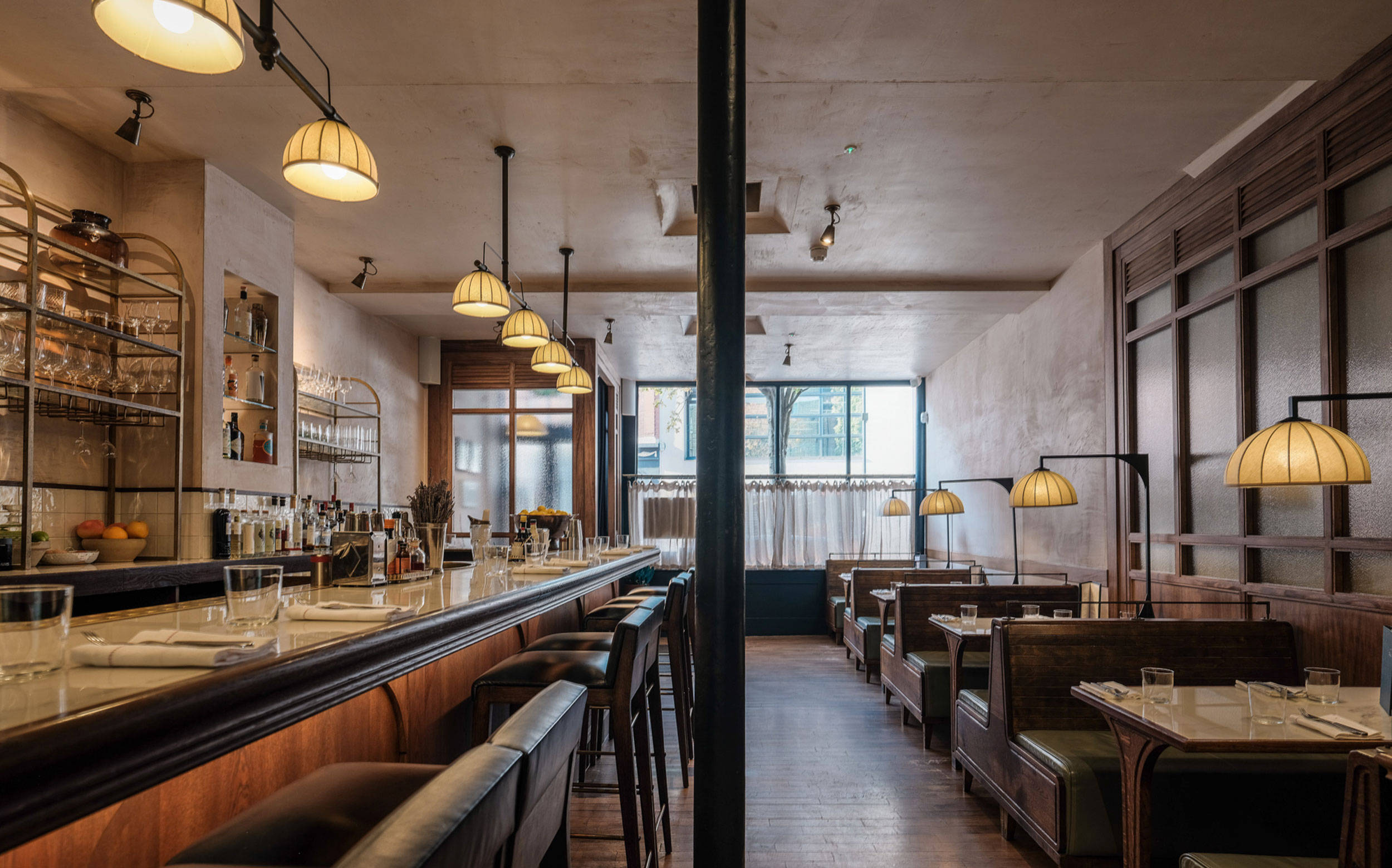 We chat to Great British Menu alumni, Kray Treadwell, as he is about to launch his inaugural restaurant, 670 Grams
Back To Top